I'm late on posting this months Bread Baking Babes story - the other babes all posted on Friday. This was a recipe that called for a weekend day to bake, and mine just seem to fly by, with nothing accomplished in the end. I insisted that this would be the weekend to bake, and today was appointed the day.

Today I made my first Potato Pizza, two of my loves together in my kitchen at last - homemade pizza and potatos!

This is another wet dough, a dough that while it is mixing you cannot imagine it could become anything other than a big gloopy mess. But it did, sort of. 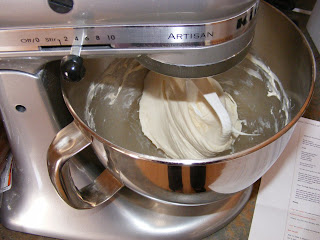 You must have a mixer for this, mixing time total is almost 30 minutes. 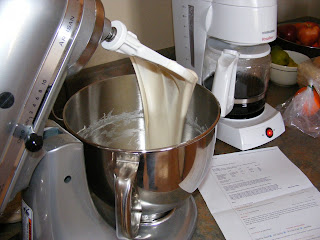 When the dough was finished it fell in sheets back into the bowl. It was quite beautiful; shiny and smooth looking. Silky. 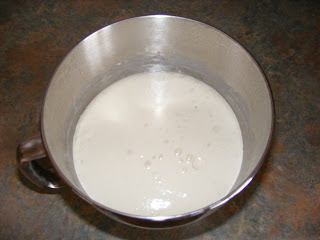 Mine proofed a little longer than the 4 hours instructed. I had such hopes, it had risen and was full of bubbles. 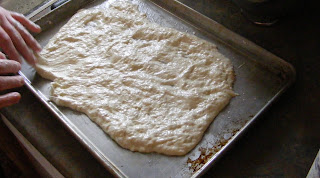 This was where our problems started - we just could not get the dough to spread in the pan. We'd push it out, it would snap back. We let it sit and try again, nothing changed. We finally resigned ourselves that we wouldn't get the dough to fit the pan, let it sit for its final rising (during which I ran into the kitchen and tried to smoosh it out a couple more times), topped it with the thinly sliced onions, potatos and finely chopped fresh rosemary, and tossed it in the oven for cooking. 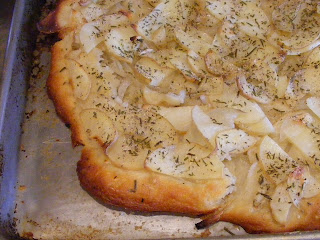 After 40 minutes, it looked pretty good. I wouldn't have minded a bit more color on the potatos, but the crust was getting pretty brown, so I thought its time should be up.

Ha ha, guess what happened next? That damn pizza was stuck solid to the pan! No amount of prying with spatulas, knives or fingers could loosen more than the barest edges of the crust. After working on it for ages we finally admitted defeat. That dough was not coming off anytime soon. I don't know why, it's a well used and well-taken-care-of pan. We oiled the bejeesus out of it.

So we nibbled on the couple of little pieces we were able to liberate. It was ok, although a little more bland that I had imagined. I pulled off as many of the potato and onion slices as I could (like I'd waste them!), and the pan is currently sitting on the kitchen counter as we figure out how to get the dough off the pan. I'll be dammed if we don't get it off; I bought that pan with a gift card at Williams Sonoma.

Go visit this months hostess Tanna's post for recipe links should you want to try this yourself.

Spreading this slippery stuff didn't happen in my pan either! I let it "relax" 3 times 10 minutes each and it was no where near an edge. But no I had no problem getting it out of the pan.
How come we can wrestle a croc and lose to a pizza crust? Just don't seem right to a babe.

Tanna, that's my thoughts exactly! You'd think after the last couple of months this would be so easy...

Oh, hon, go pour yourself a glass of wine and order take out. It was not meant to be.

Ooh, don't you just hate that when that happens! This was a strange recipe for a lot of us. (Looks good on the photo though) Well better luck next time.

Pour you..
And it looks so pretty...you always can hang it on the wall, as real Sara-Sonoma art !

Sorry, must be POOR you

Sara, you weren't the only late one! I had to post on Saturday.

And what I didn't say in my post was my pan sat in the sink for two days filled with water to "loosen up" the burnt on dough :-(

I have seen that others had the same problem with the dough as well. It is disappointing when a recipe doesn't turn out as you hoped, but so rewarding when you find that bit of perfection:D

A potato pizza! Very interesting, thanks for the great share!

i love potato pizza! too bad this one didn't turn out. sigh!

Yikes! After all that hard work..
I like the Sara-Sonoma art, are you planning to show in a gallery soon?

I seem to recall making a potato pizza many years ago. Sorry to read your lovely pizza stuck to the pan! I would recommend using parchment paper next time. I've only been using it for just under a year, but I swear by it. No more over-browned cookies, nothing sticks and it's much easier to clean the pan too :)

That is so too bad because it looks gorgeous! I had a similar pizza experience on my first attempt at making pizza. It was many years ago and I swore I was just not cut out to make pizza. But after many other trials, I can finally make a decent pizza.
The moral: Don't give up. Maybe just try another recipe! Good luck :)

The one picture makes the dough look like thick, thick cream.

Sometimes dough just has a mind of its own...

Mine was sooooo well oiled that it fried... but came out of the pans. But, then, I gave up trying to make it fit after the second attempt. I decided free-form was the way to go.
Good luck with the pan.... Too bad about the potatoes

I baked a different kind of pizza dough today, but with a potato topping too. I used Renolds Non-stick Release Aluminum wrap, and they never stick. You don't need to oil it that much either, just a bit for flavor and to crisp the bottom.

We've had pizza dough stick too sometimes. It's the dough, primarily, but we now use a pizza stone (Pampered Chef) and after many uses it's very well seasoned. Suggestion for an excellent dough recipe -- in Crescent Dragaonwagon's huge veg cookbook. We usually use spelt flour, part white, part whole, with great results. Best lately had shitake mushrooms and carmelized onions, with cheddar. Keep trying!