Well since I can't focus long enough to write anything about food I've made lately, here's the end of the year quiz that I also did in 2006 and 2007.

1. What did you do in 2009 that you’d never done before?
I had a baby! We went to Alaska. We celebrated our 8th wedding anniversary.

2. Did you keep your new year’s resolutions, and will you make more for next year?
Last years resolution was like so many years before, to drop some pounds and get in better shape. I made a start on it, but suffered from bad morning sickness from pretty much the second I got pregnant until about my 8th month. Not that I was hoping to lose weight while pregnant, but I was unable to do any sort of exercise except walking, and a lot of the time I couldn't even do that.
My other recurring resolution is to be more organized and I failed on that in 2009.
My resolutions for 2010 are the same - get more fit and become more organized.
3. Did anyone close to you give birth?
Yes! ME!

4. Did anyone close to you die?
Yes, Scotts Grandmother passed away in the summer, and in December a former work friend died.

5. What countries did you visit?
The U.S.

6. What would you like to have in 2010 that you lacked in 2009?
Here's what I said before - More confidence in myself; the ability to not worry so much about things I can't control; World Peace; some new clothes. And a smaller ass.
I would still like these things, along with more self discipline to do things that have to be done, not to put them off and off and off.

7. What dates from 2009 will remain etched upon your memory, and why?
The night we found out I was pregnant. When we told our parents. The day Paxton was born. Our first Christmas as a family of 3.

8. What was your biggest achievement of the year?
Growing and birthing a baby.

9. What was your biggest failure?
Same as always. I haven't been very organized.

10. Did you suffer illness or injury?
After being induced and going through 32+ hours of labor, I had a c-section.

11. What was the best thing you bought?
Baby gear, I guess?

12. Whose behavior merited celebration?
Scott, for sure, and my Mom and Dad. They were all so wonderful and supportive during the pregnancy and since Paxton was born. I am so lucky to have such a great family.

13. Whose behavior made you appalled and depressed?
The government. Lying liars who lie.

14. Where did most of your money go?
Mortgage. Getting ready for the baby.

16. What song will always remind you of 2009?
Just Dance by Lady Gaga. On mornings I had really bad morning sickness and had to go to work, I would sing along in the car to pep myself up.

17. Compared to this time last year, are you: a) happier or sadder?  b) thinner or fatter?  c) richer or poorer?
Happier.
Shockingly I have already lost the weight I gained during pregnancy, so it's probably a draw.
Poorer.

18. What do you wish you’d done more of?
Being organized. Resting. Worrying less.

19. What do you wish you’d done less of?
Worring about things that don't matter in the "big picture".

20. How did you spend Christmas?
We spent it at our house. My parents came for dinner. 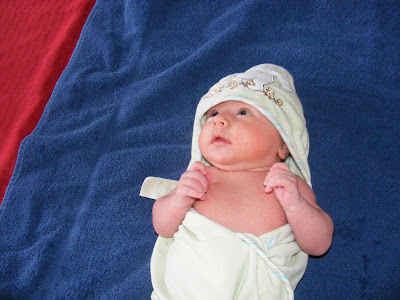 22. What was your favorite TV program?
Glee, baby!

23. Do you hate anyone now that you didn’t hate this time last year?
Hate is such a strong word. But sadly yes, there is.

24. What was the best book you read?
I didn't keep my book list like I have the past couple of years, and my memory is non-existent now. I did re-read My Life in France by Julia Child.

25. What was your greatest musical discovery?
I liked Lady Gaga, the Glee soundtrack. Anything I could sing along to.

26. What did you want and get?
A new member of the family.

27. What did you want and not get?
A new car, a winning lottery ticket.

28. What was your favorite film of this year?
Julie and Julia. LOVE Meryl Streep.

29. What did you do on your birthday, and how old were you?
Scott took me out for dinner to my favorite restaurant in town and we shared a bunch of appetizers instead of entrees. Duck fat fries, I love you most of all.

30. What one thing would have made your year immeasurably more satisfying?
Daily massages and weekly pedicures. And a winning lottery ticket.

31. How would you describe your personal fashion concept in 2009?
If it even remotely fits, wear it.

33. Which celebrity/public figure did you fancy the most?
I still heart Miikka Kiprusoff.

34. What political issue stirred you the most?
Budget cuts, the HST. Damn you, Government.

35. Who did you miss?
It depends on my hormone level. Some days, everyone. Some days, no one.

37. Tell us a valuable life lesson you learned in 2009.
Life is beautiful.

38. Quote a song lyric that sums up your year.
Don't stop belieeeeeeeeeeeving. Hold on to that feeeeeeeeeeeeeeling.
Posted by Sara at Friday, January 01, 2010