I bought my first brand new, all about bread cookbook a couple of months ago. The Easy Way to Artisan Breads and Pastries. I'd borrowed this book from the library and once I sat down and started reading it I knew I had to have my own copy, there were just too many wonderful sounding recipes to try.

I ordered it from Amazon.ca and before it came but while we still had the library copy Scott flipped thru it looking for what would be our first bread out of the book. He chose, but unfortunately neither of us looked too closely at the recipe. When the weekend morning came to bake I realized that the recipe required a sourdough starter, something I didn't have. Scott was disappointed - he'd been looking forward to making Bacon Bread, but I said hey, we'll just find another basic loaf recipe and add bacon. Why not?

We cooked up some bacon and while the dough was mixing Scott grabbed some of the chopped red onion I had on the counter for another dish and threw it in. We were now making Bacon Onion Bread, people! My biggest loaf pan was smaller than the recipe called for and the bread rose like a son of a gun. 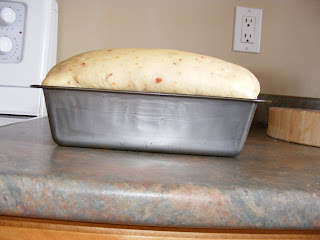 Thank goodness Mary was online that morning for advice - my bread was browning way too fast and I was afraid it would be burned on the outside before it was done on the inside. She had me lower the oven temperature and told me to take the breads temperature close to the end of cooking time which I'd never done before. 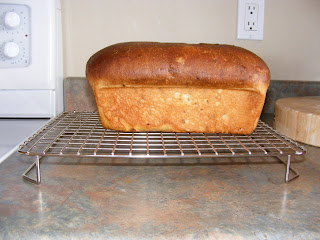 The bread came out huge, mushroom shaped and lovely. The smell was amazing - like bacon shoved up your nose, but in a good way. We've got some more ideas for the ultimate Bacon Onion Bread and will be working on them soon. 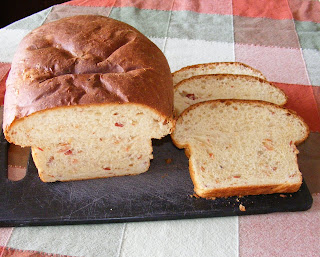 Another recent bread we baked was King Arthur Flour's Onion Buns. These were fun to make - you roll the dough into a rectangle, sprinkle it with dried minced onion (we did half with the minced onion and half with fresh sauteed onion), roll them up into a log, then cut into rolls. 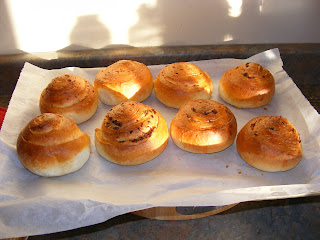 The onion flavor wasn't very strong, however these buns are the nicest buns I've ever made. Their taste and texture were fabulous. They were a family favorite, I think my Mom's favorite bread I've made them so far. 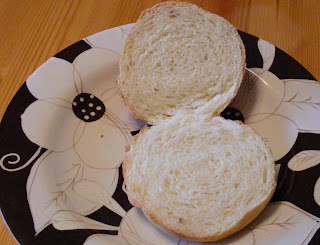 I can't get enough of King Arthur Flours blog, and here's another bread I made from their archives, Vermont Maple Oatmeal bread. Scott and I are total condiment/spice junkies, have WAY too many of both in the kitchen, so I normally try to stay away from recipes that require me to buy even more seasonings. But this bread....it called to me. So I bought the maple sugar and the maple extract and they now happily live in my spice cupboard with eleventy jillion other bottles. 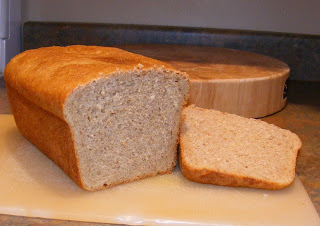 It was totally worth it though. So nice and flavorful and hearty.
Vermont Maple Oatmeal Bread
Posted by Sara at Thursday, July 02, 2009

Wow you are feeling spunkier! Bingo Sara!
Beautiful breads woman.
I think it suites you too!

Yum! I have never actually taken the temperature of a bread before, is it hard?

Katerina, nope! All Mary had me do was remove the loaf from the pan and insert a thermometer into the bottom of the loaf. Bread is done around 200'.

Tanna - the baking urge has passed, along with all other interest in food. Hoping it comes back soon.

With that said.. I gotta say the onion rolls sound like they'd be my favorite.. I love the look of them!

Bacon in bread. Yummm what a lovely and intriguing though. That would be an awesome combination. Usually I see them on top, like maybe a few crispy bits. Never seen one with bacon inside.

I think I just fell in love with your onion buns! ;)

teehee I too have "eleventy jillion" or so bottles of exotic little goodies in my pantry. People look at me like I'm nuts when they first see it. But when we're in the midst of another wild weekend cooking fest they love it because 99.999% of the time I have what we need! Love your blog. I have two of your recipes marked to try ASAP and several more flagged for "Soon!". =P