When I say Macaroni and Cheese, what do you think of?

Do you think of ooey, gooey 4 cheese macaroni and cheese that your Mom or Grandmother used to make, oozing all over your plate? Do you think of little squares of firm mac that stay together until you cut into it with the edge of your fork? Does your favorite macaroni and cheese have buttered breadcrumbs scattered on the top before baking? Do you add exotic ingredients like onions and wine, and fancy cheese? Or are you loyal to Cheddar only?

Or, are you like me, and when you think mac n cheese do you think of this? 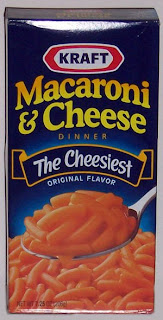 Good old Kraft Dinner. KD. Splat, as we called it in high school, after hearing the, well, splat sound it made when a scoop of it hit the wall during a fight between my friend and her younger sister one night.

For most of my life Splat was the only macaroni and cheese I knew. It's cheap. It's easy. It's fast. And while no other mac could ever replace it in my life and bottom pantry shelf, I have discovered an interesting, tasty, more decadent recipe that I plan on making from time to time. Spicy Macaroni and Cheese with Chorizo Sausage from the show A Neely Family Holiday that the food channel aired here before Christmas. We don't get the Neely's show here (although I have seen a commercial that their new travel food show will be coming soon) so I was really interested to see it. Pretty much while they were still doing their intro with the dishes they'd be making, I was on the American food channel website looking for this recipe. People, this is darn good.

Their recipe makes 6 to 8 servings, so I made a half batch, with some changes.

Cook the pasta in salted, boiling salted water until al dente. Drain in a colander and pour into a large mixing bowl. Set aside. 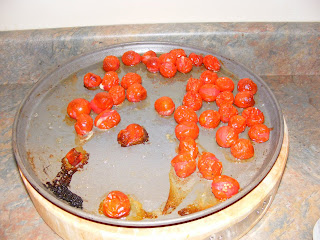 While the pasta is cooking, place the cherry tomatoes on a baking sheet and drizzle with olive oil and season with salt and pepper. Bake for 20 minutes, until plump and softened. 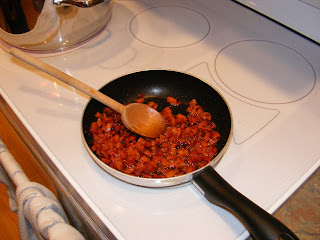 Heat a large pan over medium heat. Saute the chorizo in a saute pan until crisp. Remove and drain on paper towel. 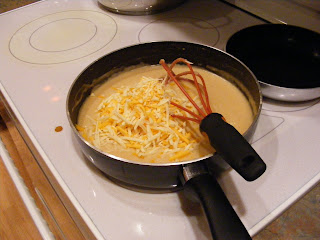 Melt 3 tablespoons butter in a pot over medium heat. Add flour, stirring for 1 minute. Whisk in the warmed milk and bring to a boil. Continue to whisk constantly. Stir while adding the mustard, hot sauce and Worcestershire. Mix both kinds of cheese together in a small bowl. Set aside 1/2 cup of the mixed cheese for the top of the dish. Stir the 1 cup of cheese into the sauce. Cook and stir until the sauce is thick. 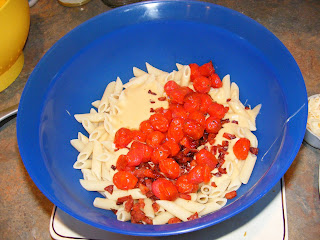 Mix together the pasta, cheese sauce, chorizo and tomatoes. 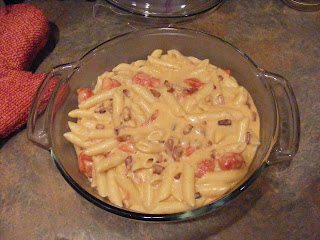 Pour into a baking dish. 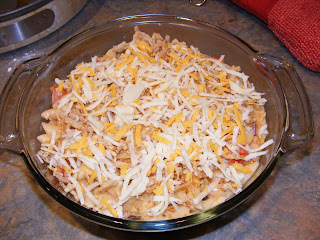 Sprinkle with the rest of the cheese and the fried onions. 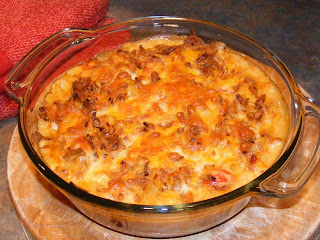 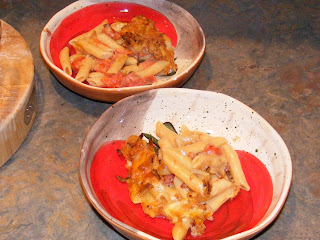 And then inhale it.


Since this has noodles in it, and since it's been a long time since I've joined in Presto Pasta Nights, I'm sending this to Ruth to share. It will knock your socks off with its cheesy, tomatoey, just a little bit spicy goodness.

Ohhh, I am definitely trying this! That looks absolutely sinful.

(And when I think of mac and cheese, I think of Velveeta shells and cheese first. I don't know if that's better or worse than the blue box!) ;)

Oh yeah! All my favorite ingredients in one single dish. What a great idea to add chorizo to mac and cheese, that takes it to a whole new level :) Happy PPN!

I'm so craving pasta these days! This looks great.

Whew! I was worried this recipe was going to start with a box...
We do love homemade mac and cheese, like Ina's - yum!
This one sounds really good - I do have some chorizo...

Oh yes chorizo added to anything is a winner. I could happily eat chorizo on its own too but this sounds like a great combo!

Woooh - that sounds awesome. It's the kind of "oh, just drop by for supper, I'm making mac n cheese" to really impress your friends.

As for KD...when I'm feeling under the weather and there's no one around to pamper me...KD to the rescue.

Thanks for sharing with Presto Pasta Nights.

Remember next week we turn 100 - hope to see you there!

This looks great. Something you could throw together on a weeknight and enjoy! Thanks for the idea.