Our group of friends that we have christened "The Bakeanistas" tore up the IM again on Sunday. Starting at the unholy hour of 7 AM my time (most everyone else is out East) we began baking Garlic Knots from the King Arthur Flour blog Baker's Banter. Mary introduced me to the blog and I love it! I've bookmarked some other recipes to try
soon.

There were
9 of us baking that morning - me, Mary, Lis, Helen, Tanna, Kelly, John, Marce, and Chris. The jokes, advice and double entendres were flying fast and furious and somehow in the end I ended up with some pretty nice little garlic buns. Let's see how I got there, shall we?

The recipe called for a few ingredients I couldn't find. King Arthur products are not sold here, so I left out a couple of things (but only one on purpose, the other was by accident!) and used some ground italian spice instead of the Pizza Dough Flavor. I mixed up the dough and let it sit for an hour. Then I rolled it into a rectangle-ish sort of shape, and notched out my knot strips. 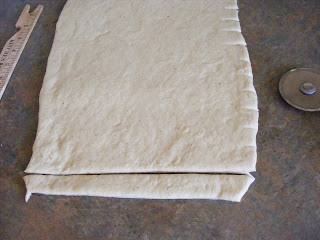 Forming the knots turned me into a mouth breathing, head scratching fool, but in the end most of them looked somewhat acceptable. It was time to let them rise again. 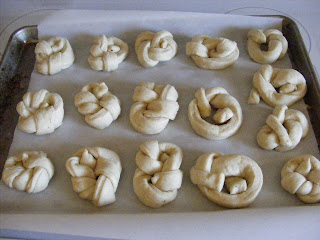 And so I did. And then it was time to put them in the oven. 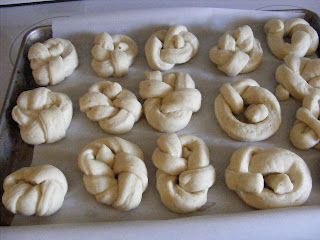 While they were baking I ran out and took some pictures of my garden for Lisa. We didn't put in a proper garden this year, instead we planted our veggies in among the flowers in the existing garden. Here, would you like to see? 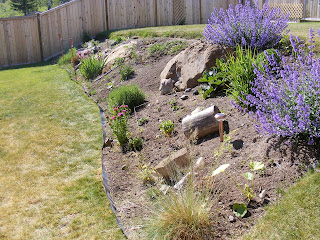 This recipe makes 16 knots. I did not want 16 little buttery garlicky knots temping me, so I took Mary's advice and removed half of them after 10 minutes of baking. I cooled them and froze them for later scarfing. 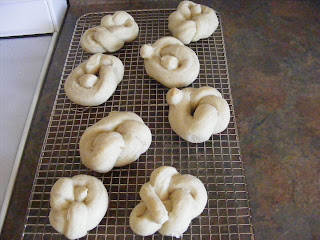 After another 5 or 6 minutes the others were done. I took them out of the oven and gave them a nice garlic butter bath. 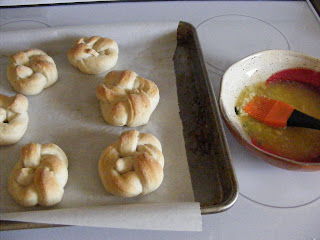 OH MY GOD. Aren't they so pretty? 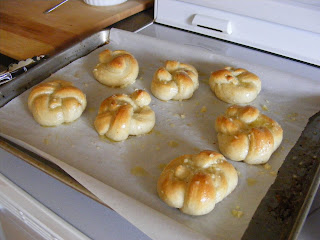 It was approximately 9:30 AM by this time. Scott and I showed incredible restraint and shared only one for breakfast. I'm not sure how we did it. Even more incredible, we later took some (well, 2) to my parents. 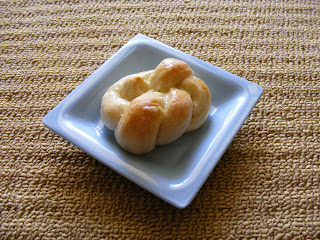 I really liked these, although I think Mary's second take with adding garlic right into the dough is brilliant. These are so easy to make but look pretty fancy. Give them a try, but have some mints handy for after dinner.
Posted by Sara at Wednesday, June 25, 2008

Could you sell me some of your self restraint. Ours were all gone by the end of the day.
You all certainly tied me in knots. Great fun Sara. Thanks.

Sara, you are my willpower idol!! I forced myself to give some away, really could have eaten half of them in one sitting. You did a fabulous job with the knotting!

They did turn out so pretty! I love your knotting technique!

I froze mine after the shaping but before baking.. I hope they will be okay as hubbs loves 'em.. and yes, next time (I will!) I make these or something similar I will definitely add garlic right into the dough.. genius!

Yeah - will power? You're going to have to bottle that and sell it, 'cause I sure need some. Love that last pic!

Sara, yes, please place one order of will power for me too!

Sweets, your buns (tee-hee) are sure garlicy and knoted pretty!!!

Your garlic knots look good. Looks like they were baked perfectly.

Those look so very tasty! And the shapes are adorable.