Okeydokey, I'm moving on to two new chefs for Smackdown. I've gone back a few years for this one. Graham Kerr, aka The Galloping Gourmet started his TV show back in the 70's. Jeff Smith, aka The Frugal Gourmet began his PBC show in the 80's.

I was never a huge fan of Graham Kerr, but I bought a couple of small cookbooks of his second hand a couple of years ago. I've always liked the Frugal Gourmet; my parents and I would watch him on PBC when I was young. I've got a few of his books and all the recipes I've tried from them have been fantastic.

So here's a Gourmet challenge - Galloping vs Frugal. And the recipes? Simple potatoes. 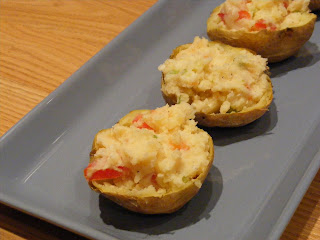 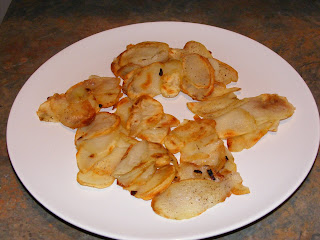 Let's start with the
potato skins from Graham Kerr. First off, this may be the most awful cookbook I own. Who edited this thing???? Almost every recipe has something missing, whether it's an ingredient amount, cooking temperature or time, something. Some of them have "handwritten notes" from Kerr, which after seeing all the omissions makes me think they typed this book up, fixed what they saw after the first read through, and then called it a day. This recipe calls for _ cup cream and tells you to bake the potatoes for 1 to 1 hours. Another recipe calls for cup butter, cups clarified butter, tsp fennel, tsp something else. I hope the editor of this book got smacked after publication. They deserve it.

But the dish. It was boring as hell. After your spuds have cooked you slice them in half, scoop out the innards and mix them with cream, tomato and green onion. Stuff it back in and serve. They needed something - more veggies, spices, cheese - to make them more interesting.


The potatos from Jeff Smith on the other hand were fantastic! Thinly sliced and pan fried twice (to make them crispy) with olive oil and garlic. A little more fussy and time consuming, but well worth it.

Well we've obviously got a clear winner here! To be honest I thought this one might be a tie. I love potatoes so much that it's rare they're not my favorite part of a meal. The Frugal Gourmet's potatoes will grace our table again soon. The Galloping Gourmet's book will soon grace the donation pile.

Slice the potatoes thinly. Heat a large non stick frying pan and add half the oil. Add the garlic and the sliced potatoes. Pan fry on one side until lightly brown. Turn and brown the other side. Remove from the pan and allow to cool. Heat the pan again with the remaining oil and cook again on both sides until nicely brown and tender.
Salt to taste and serve.

Up next on Smackdown, dishes from two of Scott's least favorite Food Network male hosts!

I LOVE the smackdowns! This one was as good as usual - can't wait for the next one!

aw, thanks deborah! :) I like them too, I cant believe its taken me so long to get this second one up! The next one wont take as long, hopefully.

We used to eat fried potatoes all the time growing up. Gosh I miss those. I should make them. Thanks for the reminder.

Golden brown pan fried potatoes sound good. That cookbook with all of the missing bits of recipes sounds a bit funny if frustrating.

I donated the book to a charity book sale being held next month. Hope no one buys it!

Sounds like a lesson or example in how NOT to write a book, especially a cookbook!
Fried potatoes would win every time in my book.

We watched the Galloping Gourmet when I was in college - and he was still drinking...It was a scream!
Never cooked anything of his though.
Also loved the frug... Both better shows than the current crop!

Maybe Graham Kerr's cookbook was written during his "wine tasting" days. I'll pass on his potatoes, but I will try Jeff Smith's. They look simple but delicious.

Memories of the GG! Early TV cooking shows -- they were a riot. I sent in to get a few of his cookbooks. Where are they now? Maybe there's a reason they're missing...

Well, sadly enough, I have found missing ingredients even in Julia Child's "Mastering the Art of French Cooking." However, nothing terribly extensive that you couldn't figure out. Nevertheless, this I have found to be a common oversight in a lot of cook books.