Cook Most of the Book - Vegan With a Vengeance

In January I said that I wanted to do more experimenting in the kitchen, trying new recipes and ingredients. How's it going? Eh.

I've been feeling like I'm in a food rut the past couple of months and I only make new things for challenges and the rest of the time it's the same old, same old. Not what I vowed at the beginning of the year!

For some reason I seem to do better at experimenting if I've got some kind of theme. So last week as I was flipping through a cookbook I decided to challenge myself to cook more from my cookbooks and try recipes I've been meaning to for a long time. I'm starting by cooking my way through most of Vegan with a Vengeance.

Yes, it's been done before. And yes, it's currently being done better. But this is my blog and if I want to have a go, if it will get me out of my rut and back to having fun in the kitchen then so be it.

Here are my rules (to be edited as I go along if necessary):
1. To post a Cook Most of the Book - Vegan with a Vengeance post once a week about the recipes I've cooked the week before. Unless I don't.
2. Ingredient substitutions or omissions as needed (unable to find, Scott won't eat, etc). However, all recipes will stay vegan.
3. Most of the Book - I am currently dieting and trying to lose weight, not gain it. Therefore as much as it pains me, I will not be making all the desserts in the book. I will make some though.

Yay! I'm strangely excited right now, even though I started this last week. OK, so I've got 3 dishes to share with you. Here we go:

Isa says: "Is this authentic? Most assuredly not, but it does taste a lot like the Pad Thai served every two feet here in Brooklyn"

Sara says: "Holy crap. Get me a ticket to Brooklyn." 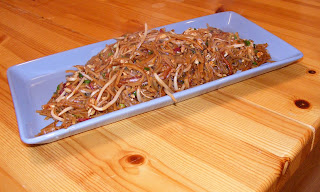 I could not have picked a better recipe to start with, I'm sure. I've had Pad Thai a couple of times before, but this blew them all out of the water. What I don't like about Pad Thai (scrambled egg, shrimp) is not here obviously, so all you are left with is amazing, amazing goodness.

What I did differently: Instead of cutting the tofu into cubes, I crumbled it (Scott likes his tofu in little pieces). I also omitted the peanuts, because I forgot to buy them.

What I'll do differently next time: Cut back on the chile sauce. It was too spicy. I was originally going to use half the amount listed, figuring that we could always add more to our plates if we wanted. Scott insisted on using the full amount but it was too much for us.

This is my new most favorite dish ever.

Isa says: "There is no substitute, well, I should say, no good substitute for good homemade pastas." 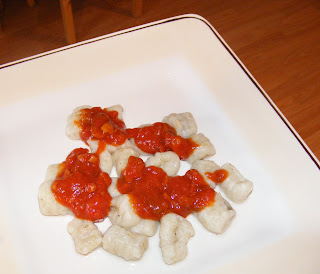 I'd only had gnocchi once before in my life, and I hated it. Then last month we went out for dinner at a really nice restaurant and Scott's meal came with a few sauteed gnocci. I tried one and it was really good. So when I saw this recipe I thought I should give them another chance. 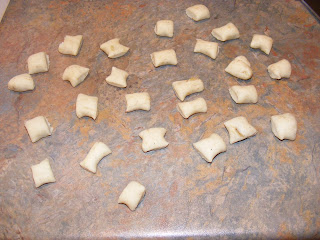 They were so easy to make, it took no time at all. And it was pretty fun. 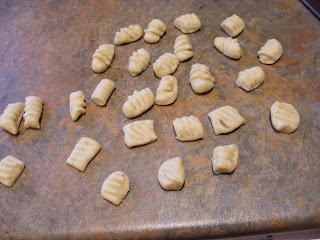 What I did differently: Nothing. We made the herbed variation. We didn't have any fresh herbs as this was a spur of the moment meal. We used dried and Scott for some reason pulverized them so they weren't visible in the dough. 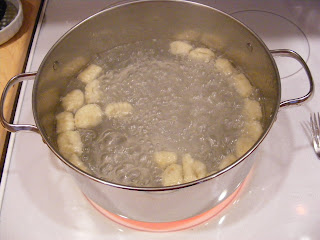 What I'll do differently next time: Nothing. They were good, but I don't think I'm a gnocchi person. I was done after about 4 of them and this recipe made a huge amount. I'd play around with them as an appetizer, but I couldn't eat them as a meal. These were better than the ones I hated from 10 years ago, but not as good as the fried ones from last month.

Isa says: "Serve it alongside potato pancakes .....or any time you think "This is good, but it could use some applesauce"." 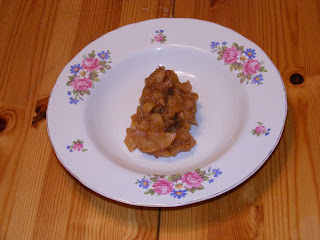 As I threw the apples in the oven to roast, I realized I've made this recipe before. But that's fine, it's damn good applesauce. I don't really care for applesauce as a condiment to savory dishes; I like it for dessert, or for breakfast. We ate the whole batch in 3 days.

What I'll do differently next time: Make more and not share with Scott.

Oh I just love that book, and I am sure you will too. You have got to try the mango summer rolls soon....oh and the potato and tofu stew thing with miso. So yummy :)

well isa must not live by me, because yes we have thai every two feet, but it's overly americanized sweet! i would love spicy pad thai, usually i'm putty more chiles in than asked for!

Peabody, it is. If you were the kind to put applesauce on latkes, this would be the one to use.

Judy, I really want to make the biscuits and chickpea gravy next.

Mimi, lucky you, I think there is one Thai place here in town. But never again will I go out for Pad Thai!

What a fun project. I have a hard time making it through 4 recipes in 1 cookbook before I want to try a new one, so I admire you!

We don't ever eat vegan, but you are making me want to start!

Deborah, that is my problem too, and what I'm trying to fix. I've got all these great cookbooks and never use them! I love vegan food but must admit that I haven't tried tempeh or seitan yet. That's another reason I'm doing this.

I'm in a rut lately too. I have stuff to post about but it's just not happening...

Hello I just entered before I have to leave to the airport, it's been very nice to meet you, if you want here is the site I told you about where I type some stuff and make good money (I work from home): here it is

I'd love Pad Thai and that last bit made me laugh... Make more and not share with Scott.

Sara thank you for a good laugh!
Your "rules" are perfect: Change as I go along. (that sounds familiar) Unless I don't.
And poor Scott: Make more and not share!
It is your blog, I have my own and we can do with them whatever we want;))