I felt the need to make another dish for this months Weekend Cookbook Challenge. I received two Ina Garten books for Christmas and I haven't cooked out of either yet. While flipping through Barefoot in Paris (my favorite Ina book) I found a recipe to cook baby potatos in a DO (I read somewhere last night that DO is the slang that cooks use for their Dutch Ovens. And then I don't have to type out Dutch Oven over and over again.) that sounded really nice.

You melt a crap load of butter in your DO, then toss in whole baby potatos that have been scrubbed clean. They cook, tightly covered, over low heat for 20 or 30 minutes, then you toss them with herbs and gobble them down. I got them started and then was immediately filled with anxiety. I have trouble controlling the heat on the stove in our new house. It is beyond temperamental. Set it at medium high, it takes forever to heat up. But turn up the heat just a bare millimeter, and everything burns to a crisp in two seconds. I was really really worried that because Ina instructs you not to remove the lid during cooking, only to shake the DO from time to time, that everything was going to burn into a black mess and then there would be no potatos to eat. The horror!

It all turned out just fine in the end. I didn't have too much trouble with the temperature, although the potatos took about 45 minutes to cook. I'll admit that I peeked more than once just to make sure everyone was ok. And they were! 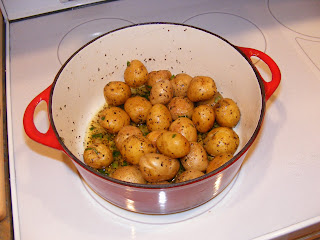 These were very delicious, although a bit too salty. Next time I'll cut the salt back by at least half. Yay - a successful Ina recipe to negate the lemon cake I wasn't crazy about.

Lis is accepting entries for this months Weekend Cookbook Challenge until March 26. So send them in to her! Here's how.

Herbed New Potatos
from Barefoot in Paris
by Ina Garten

Melt the butter in a DO over large heavy-bottomed pot. Add the whole potatos, salt and pepper and toss well. Cover the pot tightly and cook over low heat for 20 to 30 minutes, until the potatos are just tender when tested with a small knife. From time to time shake the pot without removing the lid to prevent the bottom potatos from burning. Turn off the heat and allow the potatos to steam for another 5 minutes. Don't overcook! Toss with the herbs and serve hot.
Posted by Sara at Sunday, March 23, 2008

Yanno.. The swooning I find myself in while drooling between the sounds/looks of these delightful potatoes and her Beef Bourg - I know that I WILL make out with her one day - Jeffrey be damned. She's the Barefooted Bomb!!

I will be making these.. I wish I had some in the pantry right now as they'd be KILLER with the Salisbury Steak that Hubbs is making. *slurp*

Thanks for a second entry - I will be making out with you too!! Ohhh yess my pretty.. you just wait! :D

Anything with a crap load of butter is for me. :)

Is 4 T a crap load of butter? Ummm, I'd better change my perspective.
This looks wonderful to me.

Lis, I've picked out my next recipe from that book - her brioche. I've never had brioche before.

Tanna, well, when you melt it, it really looks like a lot. but then it's a lot of potatos too....

What a great recipe - so simple, but wonderful!

I have a dessert challenge up on my blog right now! Have any good Strawberry Dessert recipes?

I have a dessert challenge up on my blog right now! Have any good Strawberry Dessert recipes?

"I'll admit that I peeked more than once just to make sure everyone was ok."

OMG. You peeked? Have you no fear of the Culinary Gods? You could have been blinded, struck tasteless, or worse... turned into Rachel Ray.

But those taters look yummy. Gotta get me a DO.

Havril - Of course I fear the culinary Gods, but I was scared to wreck my taters. And DON'T threaten me with RR. That's cruel!
How you doin'? How's the baby?

Sorry, that was cruel. Consider this my RR retraction.

I'm good, thanks. Baby's great. Even though he's still exclusively nursing, he seems pretty interested in watching us eat grownup food, so he might turn out to be a foodie.

I do that with olive oil instead of butter for something slightly more healthy...
As the potatoes are whole and unpeeles, they don't soak up fat.
I'ts a great recipe fore potatoes which are to small to be peeled.