Geeze! I seem to be in a bit of a blogging rut...in the blog doldrums....in the dumps, in a funk, in a slump. I've been neglecting my blog and all of yours too lately. I haven't taken part in many food events, and it has been ages and ages since I send a post to Ruth for her very popular Presto Pasta Nights.

I have tried to take part. In January I made this Beef Stroganoff 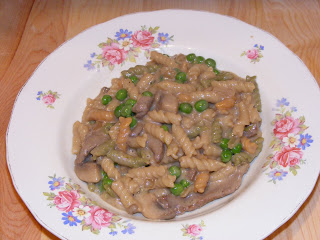 But I took too long in posting about it, and didn't write down the recipe. It's gone forever from my head now. Which is really too bad, it was very nice.

Then last month I worked on a post about portion sizes 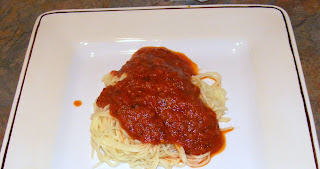 But it just stalled out in my head and I couldn't get 'er done.

Last week I had dinner downtown at Peter's Pasta. It's a small place run by Peter and his family. They make their own pasta and sauces, and it's all very very good. One of my dining companions had the half order of Spaghetti with Mushroom Sauce. It was so good I'd wished I had ordered a full order of it for myself.

The next night I was checking out the contents of the fridge for dinner and came across some mushrooms. So we made our own Mushroom Pasta!

We cleaned and thinly sliced the mushrooms - I'm guessing we had 10 to 12 ounces. We fried them up in a touch of olive oil and seasoned them with salt and pepper. Set them aside. 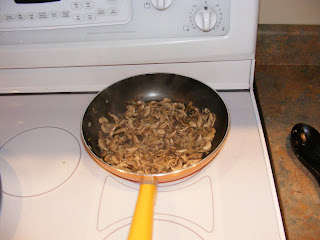 I decided to use the cream sauce from January's Creamed Spinach as the base for our mushroom pasta sauce. Because Scott likes to eat and wanted leftovers, I tripled the amount of sauce. So I used:
3 tb butter
2 tb cornstarch
3 tsp vegetable bouillon
2 1/4 cup non fat milk

Melt the butter in a large pan. Whisk in the cornstarch and vegetable bouillon and cook for one minute. Add the milk and whisk to blend all the ingredients. Bring to a simmer and cook over low heat for 2-3 minutes until thick and bubbly.

Then toss in the mushrooms and 1/2 cup of Parmesan cheese. Stir until the cheese has melted and the mushrooms are hot. Stir in some chopped parsley and pepper. Taste it before you add salt - the mushrooms have been salted and Parmesan is salty too. 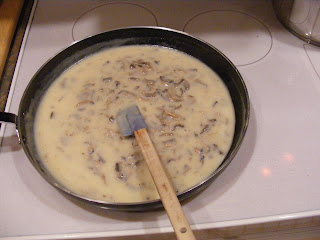 We cooked up some pasta we'd bought from the Italian deli downtown - Fratelli Deli. The package is all in Italian, but I think the pasta is called Gramigna Emiliana. It's like slightly longer thinner macaroni. I tossed together just enough pasta and sauce for two servings, and the rest went in the fridge. 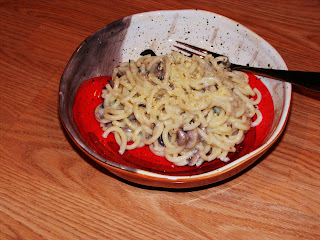 I am so pleased at how this came out. Creamy, cheesy, mushroomy. Exactly what I was looking for!

I am glad you actually got to write down this recipe...I'm drooling! Thanks for sharing with Presto Pasta Nights.

As for great posts and especially recipes that get stuck in your head...I've been there too many times to count!

Wow, Sara that looks great. I'm having a hard time getting a post up to. Maybe I'm just working too many different things to get one up.
Really like the looks of the mushroom sauce.

That is one of my favorite pasta shapes - it's the go-to choice for me when I make my world famous Mac and Cheese. Great choice and welcome back!

I love that third one. It looks so good.

Oooh, the mushroom one sounds amazing!!

I might have to try the mushroom one. Looks good.

I will definately try this mushroom sauce, it sounds so delicious and easy to make.

It's kind of like a bechemel cheese sauce that I make. I also use fat free milk. I have never tried using vegetable bouillon; my flavor base is usually garlic. But this sounds interesting!

Thanks for coming out of your rut. I've been there many times.

Look at all those delcious pasta Sara. I think that having to come up with intersting foods to blog about keeps me out of a food rut most of the time...there are still so many of my tried and true recipes to blog about:D

That mushroom pasta looks great. I really feel for you with the Stroganoff - there's nothing worse than making up a recipe as you go along, only to have forgotten it by the time you get to the table to discover it's the best thing/version/experiment you've ever made.