It's Mardi Gras, aka Fat Tuesday today! Mardi Gras is the day before Ash Wednesday, which is the first day of Lent. And Lent is the 40 day period (excluding Sundays) before Easter, and is a time (for those who follow) of prayer and self denial. Meaning you would abstain from something (drinking, eating chocolate, whatever) for 40 days. Which I guess is why Fat Tuesday would be a big deal; the last hurrah before you must go without your chosen vice for 40 days.

To be honest, I've never paid much attention to Mardi Gras. There are no huge Mardi Gras celebrations around here, and we do not practice Lent, choosing to keep our vices close to us all year round.

Last month Mary and I baked together through the magic of instant messaging, and we had so much fun we decided to make it a monthly occasion. Last week Mary emailed me to see if I would be interested in getting together to try our hands at King Cake. Great! I said. And then Googled King Cake to see exactly what it is.

There are tons and tons of different King Cake recipes, but basically it's a sweet bread dough. Some have fillings, some don't. Mary chose a recipe from Emeril Lagasse that had a sweetened cream cheese filling. So this past Sunday Mary and I met online at 8:00 my time and got cooking.

Emeril's recipe - here it is for you - makes a huge cake of 20 to 22 servings. Mary - who is my baking guru; my go-to-girl for anything flour and yeast related - said I could halve the recipe.

So I did. I ended up having to make the dough twice. The first time I halved everything BUT the butter and had to throw out the dough. The second time around I was still having trouble with the dough coming together, but added some extra milk. It was pretty iffy looking, but my patience was running thin, and it wasn't even 9 AM yet. I proofed the dough in the oven with the light on, as Mary has taught me to do, and after a bit of extra time the dough still looked funny, but it had risen.

I rolled out the dough and spread the filling along one side, then rolled and formed the log into a ring. It was tough to pinch the seam closed, but throughout the second rising of the dough I kept pinching. 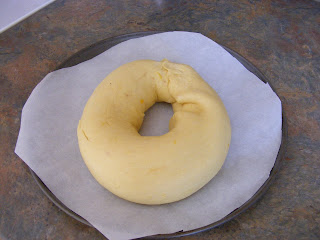 While the dough was having its second rising I got my sugars ready. The two stores I checked out had a crappy selection of colored sugar - red and green only. So I made my own gold, green and purple sugars with regular sugar, food coloring and my mini chopper. The purple represents justice, green represents faith and the gold represents power. 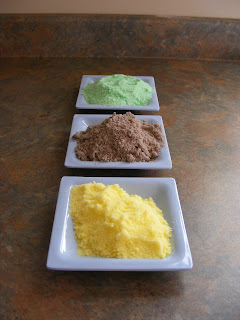 Normally a small plastic baby (representing baby Jesus) or a pecan half are inserted in the cake. Whomever find the baby or nut in their piece is the Queen or King of the party, and must prepare the King Cake next Mardi Gras. Because I am sharing this with lots of people at various places I didn't put one in.

My cake baked for about 35 minutes, and then I left it to cool. 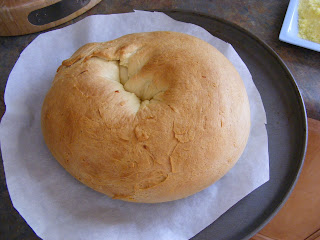 My middle closed up, though. I should have made the center larger.

Then I made the frosting - icing sugar, lemon juice and milk. After icing, it was time for the sugar.

Decorating with the sugar was really awkward, and I didn't do a super job. But I think that for a first effort, it looks pretty ok: 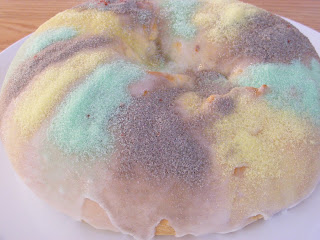 Luckily we didn't eat lunch that day, so I had no guilt about eating a piece. 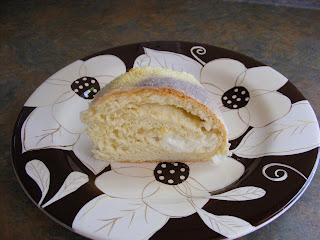 This is really, really good! The dough isn't overly sweet, so the sugar and the frosting don't push this over the top. The bread is tender, and the cream cheese filling is very cheesecake-like. I do have some gaps between the filling and dough, and that's my fault for not being more careful during the rolling. It doesn't affect the taste, of course.

If you're up for a day in the kitchen, give this a try! But remember - King Cake can NOT be made before Twelfth Night or after Mardi Gras day! But don't ask me why.

Thanks to Mary - can't wait to see what next month brings!

What fun! Baking by IM...who knew.

Sara you are just wrong. This is really beautiful!! I love your colors! All the king cakes I've seen but yours is the one that gives me pause to consider making one.

Baking by IM sounds like fun, distance is no longer a problem. You need to get webcams set up too!

Sara, your cake is gorgeous. It turned out much better than mine did! Basically because you didn't have a dough filling blow out like I did!

I second Bri, we need webcams! OH WAIT..on second thought then you could see that I don't get out of my pjs, put my contacts in, and just throw my hair up in a knot on the days we bake together!

Can't wait until next month...

Wow, what a transformation. The final cake looks so beautiful! Great job! Too complicated for me though. I'll stick to cupcakes for now ;)

As you second IM-buddy that day, I want to say your cake looks great! I've wanted to make one of those, but I'm too lazy. Good work!

Breadchick told me that I made the same recipe as you two! We're baking psychics!

I love that you made your own colored sugar. I wimped out and used what I could find. And yours looks great!

I added some of the lemon curd (leftover from LMP day) to my filling, and I could just sit and eat it with a spoon.

Do you think it is more like a cake or a bread? The name confuses me.

I never paid much attention to Mardi Gras either, until last year when we were in Northern Florida during Mardi Gras and couldn't get a rental car cuz of it. Ah, good times.

The cake looks good. I like the colours of the baked on sugar.

I was going to make a king cake, but I got out of work too late. :(
I've made this cake before! Yes, it's really, really good. Last year I DOUBLED the recipe....I know, I know.
I had king cake going everywhere.

Lent really interests me. I think I might try to eat better for 40 days. We'll see...

I've always wanted to try one of these! Your cake looks delicious!

We have a salesman down in LA and he has taken it upon himself to enlighten us.. although a week late, we'll be receiving a "deluxe" (whatever that means) King cake by mail. I'm really excited to try it. :)